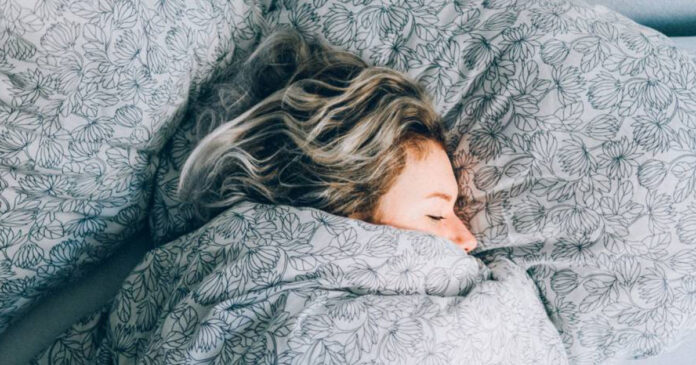 Sleep is one of the most important things to maintain good physical and mental health.. While we sleep, our body performs many important tasks for our body.

Each phase of sleep has a function and a role in maintaining brain and cognitive functions. In some stages, cell and tissue repairs are also carried out, in addition to other tasks that keep the body healthy and prepare it for the next day.

In a night’s sleep a person usually goes through 4 to 5 cycles of between 90 and 120 minutes duration, of non-REM and REM sleep. Sleep stages change throughout the night, with more non-REM sleep in the first half and more REM sleep in the second half.

In this article, we will discuss in detail the different phases of non-REM and REM sleep, including the physiological changes that are experienced in the body during each one.

What is a sleep cycle?

Sleep is not a smooth process. Sleep cycles are made up of four stages, which are repeated throughout the night while the person sleeps.. Each sleep cycle has a different duration, but the average is about 90 minutes. During a typical night, a person goes through between 4 and 6 sleep cycles.

You can see how the brain behaves when a person falls asleep using an EEG. This is a non-invasive test that records brain activity. During the initial stages of sleep, a person is still quite conscious and alert. The brain produces beta waves: small, fast waves that show the brain is active and working.

As the brain relaxes and slows down, alpha brain waves begin to register.. During the transition to deep sleep, strange and unusual sensations are sometimes experienced, called hypnagogic hallucinations.

When someone feels like they are falling, or hears their name being called, they are experiencing hypnagogic hallucinations. The myoclonic jerk is also a common example of this phenomenon, this refers to the sudden jump -for no apparent reason- that can occur while a person is sleeping. Alcohol use, age, and sleep patterns all affect the number of sleep cycles a person has per night.

What are the phases of sleep?

Sleep is a physiological process in our body that takes place while we sleep.. Sleep, through its cycles, allows the brain and the rest of our body systems to perform tasks necessary for the proper functioning of our body. These tasks include cell and tissue repair, toxin removal, and memory processing, among others.

While we sleep, the brain goes through different patterns of brain activity, which show the different phases of sleep in which a person is and can be detected thanks to an electroencephalogram.

The amount of time spent in each stage of sleep and the number of sleep cycles change as the night progresses. The first sleep cycle is the shortestlasts between 70 and 100 minutes, while subsequent cycles are longer, lasting between 90 and 120 minutes.

Non-REM sleep is divided into three different stages. The higher the stage of non-REM sleep, the more difficult it is to wake a person up.

Wakefulness and sleep coexist for a short time at the beginning of the sleep cycle. The first phase of the sleep cycle is a transition between these two states. Stage 1 NREM is the shortest stage of sleep, lasting between 5 and 10 minutes only. During this phase of sleep, a person may think that he was not really sleeping, if he wakes up.

During the N1 phase of sleep, the body does not completely relax, but the activities of the brain and body begin to slow down. There are small changes in brain activity during this stage of sleep: the brain produces more delta waves and some physiological changes occur:

Approximately 50% of the total time spent sleeping is in non-REM stage 2 sleep. This phase usually lasts about 20 minutes per cycle.

When we first go to sleep, our body slows down and prepares to enter phase 3 sleep and REM, which are the deep sleep phases in which the body and brain repair and adjust for the day. Next.

stage 2 sleep It is also a stage where our body slows down, and it occurs when the brain produces more Delta brain waves.. Phase 2 of the sleep cycle brings the body into a more relaxed state, just as for the other phases a series of physiological changes occur: muscles relax, breathing and heart rate slow, and the temperature drops.

At the same time, the eyes stop moving and the brain produces new wave patterns. The level of brain activity decreases, but there are moments of increased activity that help the person to combat the excitement due to external influences.

The N2 phase generally occupies about half of a person’s total sleep time. During the first sleep cycle, phase 2 can last between 10 and 25 minutes. Each phase can lengthen as the night progresses.

Stage 3 sleep is also known as deep sleep. In this phase of sleep, the body relaxes even more, the respiratory rate decreases, as does the heart rate. The body also releases more melatonin. All this makes it difficult for the person to wake up.

Phase 3 sleep is also called slow wave sleep, because the brain produces delta waves during this phase. Stage 3 sleep is important for restful sleep, allows the body and its tissues to grow and heal, supports the immune system and performs other key functions for the body. This stage of sleep also contributes to the maintenance of cognitive functions and memory.

During REM sleep, the body is paralyzed, except for the muscles responsible for breathing and the eyes. This state is known as atony. At the same time, brain activity increases, approaching the levels seen when a person is awake.

Although the body does not move, the eyes can be seen to move, which is why this stage is called REM sleep. REM sleep is crucial for many cognitive functions, such as memory, creativity, and learning. An increase in brain activity is observed in REM sleep, which is the phase of sleep with the most vivid dreams. Dreams can occur at any time during the sleep cycle, but they are more intense and frequent in REM periods.

The amount of time it takes to enter the REM sleep stages changes throughout the night, depending on the amount of time asleep. Usually, 90 minutes of sleep is the earliest a person can enter REM sleep. As the night progresses, the time in REM sleep increases, especially in the second half of the night. In total, adults spend about a quarter of their sleep in REM sleep.

Although we can assume that yes, the dream does not progress through the four phases described in a perfect order, there are some alterations that it is important to describe. In a full night of uninterrupted sleep, the sleep stages progress as follows: the first three sleep stages if occurring in a sequential order, but at the end of NREM stage 3 a return to stage 2 NREM sleep (before entering REM sleep).

After REM sleep is over, the body normally goes through NREM 2 before repeating the cycle again.. The cycle repeats itself 4-5 times throughout sleep, with the time spent in each stage changing throughout the night.

Why we remember emotional events better (like a wedding)

How to identify a heat stroke? Symptoms and how to...

Does washing after intercourse prevent pregnancy? Know the most effective...

Light pollution makes the stars ‘disappear’ from the sky