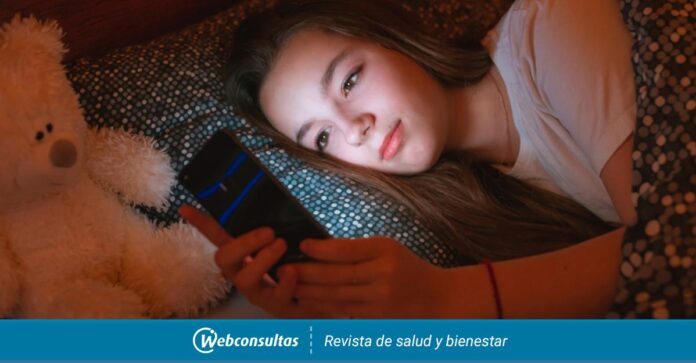 Sleeping poorly or not getting enough rest it can contribute to the appearance of numerous diseases, from obesity to stroke, glaucoma, or dementia, among others, and it is especially serious in the case of children and adolescents because the brain continues to develop at this stage of life. Now, new research has found a link between lack of sleep in adolescence and a increased risk of developing multiple sclerosis (MS) later.

The study has been carried out by scientists from the University of Karolinska (Sweden) and its results show that the adolescents who sleep less than seven hours have a slightly increased risk of developing the disease. However, the authors have qualified that perhaps poor sleep is not the cause of multiple sclerosis, but could actually be a consequence of already incubating the disease.

The exact causes of multiple sclerosis have not been determined, although it is considered to have a autoimmune origin and it has been related to genetic and environmental factors, such as body mass index (BMI) in adolescence, tobacco use, sun exposure, vitamin D deficiency or Epstein-Barr virus infection. Shift work has also been linked to an increased risk of MS, especially if done from an early age, but the influence of sleep patterns (duration, disruption of the biological clock, and quality of sleep) has not yet been fully explored. at this risk.

“Insufficient sleep and poor sleep quality during adolescence seem to increase the risk of developing MS later. Sufficient restful sleep, necessary for proper immune function, may be another preventive factor against EM”, say the researchers, who have published their findings in the Journal of Neurology Neurosurgery & Psychiatry.

Sleeping less than 7 hours increased the risk of multiple sclerosis

The research analyzed data from more than 5,000 cases and controls collected in the Epidemiological Investigation of Multiple Sclerosis (EIMS), which included residents of Sweden aged 16 to 70 years. Individuals with MS were matched for age, sex, and residential area with two randomly selected healthy individuals from the national population register between 2005 and 2013 and 2015 and 2018. The researchers focused primarily on sleep patterns between the ages of 15 and 19and the final analysis included 2,075 people with MS and 3,164 without the disease in this age group when they were recruited for the study.

The participants also answered questions about their sleep patterns at different ages: the duration of sleep on work or school days, and on weekends or vacation days. Short sleep was considered to be that which lasted less than 7 hours/night; adequate sleep from 7 to 9 hours; and prolonged sleep such as 10 or more hours. These people further rated sleep quality over different age periods using a 5-point scale, where 5 equals very good.

The average age at which multiple sclerosis was diagnosed was 34 years. The duration and quality of sleep during adolescence were associated with the risk of an MS diagnosis, which increased with less sleep and poorer quality rest. Compared with sleeping 7 to 9 hours a night during adolescence, brief sleep was associated with a 40% increased risk of developing MS laterafter taking into account different factors that could influence the results, including BMI at age 20 and smoking.

Prolonged sleep was not associated with an increased risk of MS. Subjectively assessed poor sleep quality during this period was associated with a 50% increased risk of developing MS. The researchers have cautioned that these findings should be interpreted with caution because it could be that the shortness of sleep is due to prior neurological damage, rather than the other way around. Although they also remember that poor quality sleep negatively affects the immune system and inflammatory signaling and that the biological clock is also involved in regulating the immune response.

As explained Pablo Villoslada, from IDIBAPS–Hospital Clínic, in statements to SMC Spain, “until now there was no clear evidence that lack of sleep in adolescents was a risk factor. Of course, it is well known that with adolescence the sleep pattern changes and that most teens are sleep deprived, but this does not have to increase the risk of multiple sclerosis. In this study they show that sleeping less than seven hours slightly increases that risk. As they say, it does not mean that this is the cause, it could be the consequence of already incubating the disease (what is called the prodrome of the disease in medicine)”.

The expert adds: “These results help design public health policies, promoting healthy sleep in adolescents. For people who already have the disease, improving their sleep will help improve their overall health, although it probably won’t change how their disease progresses.”

Light pollution makes the stars ‘disappear’ from the sky