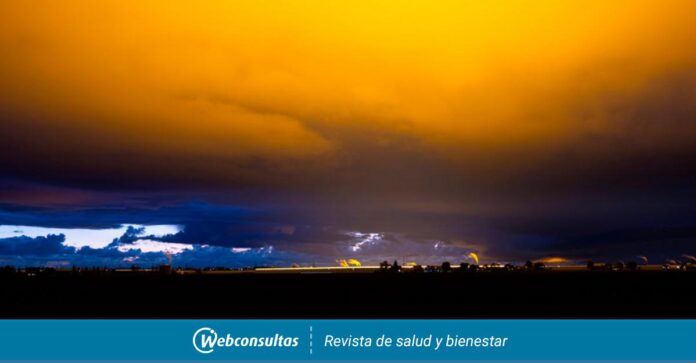 The Light pollution is increasing across the planet – an average of 9.6% per year – to the point that ‘sky glare’ or accumulated brightness in clear skies produced by artificial light sources prevents us from seeing the stars, and those Those who wish to contemplate them will have to do astrotourism, that is, travel to places where you can still enjoy the starry sky.

If no action is taken and this rate continues, a person who was born in a place where 250 stars are now seen will only be able to see 100 stars in the same place when they turn 18. That is one of the conclusions reached by a study led by Christopher Kyba, from the GFZ German Research Center for Geosciences and the Ruht University of Bochum (Germany), with colleagues from the GFZ and the NOIRLab of the National Geosciences Foundation. United States, which has just been published in the magazine Science.

This study has been based on the analysis of 51,351 naked-eye observations made by people from all over the world between 2011 and 2022 and is part of the citizen science project Globe at Night, focused on light pollution. Long after sunset, the sky remains bright over much of the Earth’s surface due to light pollution, which has serious environmental consequences and should be investigated, says Constance Walker, co-author of the study and director of the Globe at Night by NOIRLab.

“The growth of light pollution is being much faster than we expected and it is being global. The most important thing is not the loss of star vision, but the environmental impact that this entails”

The negative effects of light pollution impact living beings, including people, because the daily cycles of light and darkness determine many behaviors and physiological processes. “The sky glow it affects both diurnal and nocturnal animals and also destroys a significant part of our cultural heritage,” says Walker.

The Globe at Night project, initiated by the US National Science Foundation’s NOIRLab, began in 2006 and people around the world can participate in it by observing the night sky in their area of ​​residence and reporting in an online questionnaire about which of a set of eight star maps best matches what they see. Each graph shows the sky under different levels of light pollution. “The contributions of individual people work together as if they were a global sensor networkmaking new science possible,” says Christopher Kyba, who analyzed data from 51,351 participants from around the world who logged on cloudless and moonless nights between 2011 and 2022.

The researchers analyzed 19,262 locations around the world, of which 3,699 were in Europe and 9,488 in North America. To calculate a rate of change in sky brightness from this data, and to take into account that observers were also in different locations over the years, they used a global model for sky brightness based on 2014 satellite data. “The speed at which stars become invisible to people in urban environments is dramatic,” says Kyba.

The researchers found that the change in the number of visible stars can be explained by increases in the brightness of the night sky. In Europe, they found a 6.5% annual increase in brightness and in North America, 10.4%. Kyba believes that the difference between human observation and satellite measurements is probably due to changes in lighting practices: “Satellites are more sensitive to light that is directed towards the sky. But it is the horizontally emitted light that accounts for most of the sky glare,” he explains, adding that “if billboards and façade lighting become more frequent, bigger or brighter, they could have a big impact on the brightness of the sky without making a big difference in the satellite images.”

The study authors also mention the widespread switch from orange sodium vapor lamps to White LEDs, which emit much more blue light. “Our eyes are more sensitive to blue light at night, and blue light is more likely to scatter into the atmosphere, thus contributing more to the brightness of the sky.” “The only satellites that can image the entire Earth at night are not sensitive in the blue light wavelength range.”

Alexander Sanchez de Miguel, a researcher in the Instrumental and Galactic Astrophysics group at the Complutense University of Madrid and leader of the Cities at Night citizen science project, told SMC Spain: “The article seems quite robust to me. In this case humans are being used as sensors. Human physiology is not going to change for a long time and therefore when dealing with a very large amount of data, [el ojo humano] it is more reliable than satellite images. The conclusions of the article are in line with what we published a few months ago about what satellites can say. It lets us see that light pollution is growing around the world, but it doesn’t let us know exactly where.”

“This study indicates that the growth of light pollution is being much faster than we expected and that it is being global. The most important thing is not the loss of vision of stars (that is a secondary issue): what is really worrying is the environmental impact that this entails”.