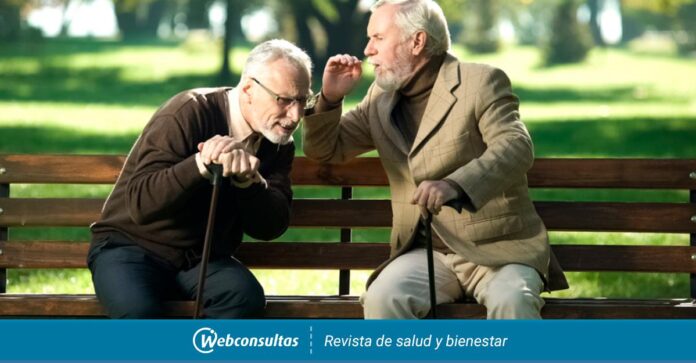 Around 2.5 billion people will be living with some degree of hearing loss by 2050, according to estimates by the World Health Organization (WHO). In the case of older people, the presbiacusia or hearing loss due to age, has a negative impact on their functional and emotional capacities, on general health, and also on their cognitive abilities.

In fact, new research led by scientists at the Johns Hopkins Bloomberg School of Public Health (United States) reveals that older adults who suffer a Hearing loss are more likely to develop some type of dementia, although he points out that the treatment of ear problems in the elderly may reduce the risk of cognitive decline.

The researchers analyzed the data of 2,413 people, of whom around half were over 80 years of age and who constituted a nationally representative sample, and verified that those whose presbycusis was more severe were more likely to have dementia, although the likelihood was reduced among those who used hearing aids for hearing loss.

The results of the study have been published in Journal of the American Medical Association and support findings from previous work that hearing loss may be a risk factor for dementia and that its treatment may decrease the risk of dementia.

“This study refines what we have observed about the link between hearing loss and dementia, and builds support for public health action to improve access to hearing caresaid lead author Alison Huang, a senior research associate in the Bloomberg School’s Department of Epidemiology and the Cochlear Center for Hearing and Public Health, also at the Bloomberg School.

It is not yet clear how hearing loss is related to dementia, and studies conducted so far attribute it to several potential mechanisms, but the authors of the new paper hope to better understand the effect of hearing loss treatment in cognition and dementia from their Assessment of Cognitive Health and Aging in the Elderly (ACHIEVE) Study, a randomized trial whose three-year results are expected to be released this year.

What are the symptoms of meningitis? Is it possible to...

What is the Hiccup? Causes and ways to get rid...